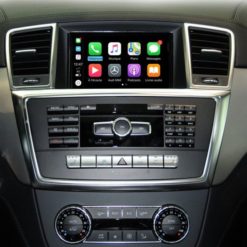 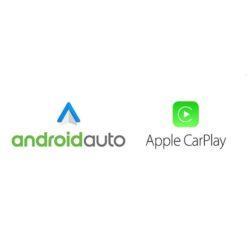 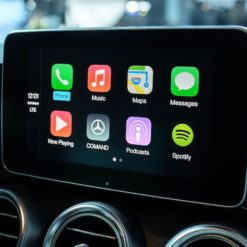 Add to Wishlist
If deposit option chosen, balance payment will be required at time of job completion.

More and more Mercedes Benz new cars come with Apple CarPlay and Android Auto. However, many Mercedes do not have the options built into the head units. For these vehicles we have now developed a new Mercedes Wireless Apple CarPlay SmartBox solution that will enable Wireless CarPlay and Android Auto to any Mercedes 2011 to 2015 with NTG4.5/4.7 Comand or Audio 20 with Becker Map Pilot Sat Nav. If you are unsure which Comand or Audio 20 you have, check our Head-unit Version Fact Sheet.

The centre dash trim and radio need to be removed to install this product. The connections are Plug & Play.

Apple CarPlay connects wirelessly or via USB cable. Android Auto connects by USB cable, or sometimes wirelessly on late Samsung phones (and a few others)

The system differs in the way it selects audio and video separately. If Audio & Video are both switched across to CarPlay then the system will work totally seamlessly. This is great if you are listening to music from your phone (iTunes, Spotify, etc). CarPlay navigation commands will interrupt as expected.

If however, you choose to listen to the car system (eg. FM/DAB radio, CD etc), you will need to switch away the audio from the Mercedes Wireless Apple CarPlay SmartBox to select your source. This means that as the CarPlay SmartBox has no way of switching it’s sound back on. Using an internet radio player will enable seamless radio and navigation. This does not affect the in-built navigation.

This system will work with the following cars:

If you are unsure which Comand or Audio 20 you have, check our Head-unit Version Fact Sheet.

For alternative Comand/Audio 20 versions, check out the products below: 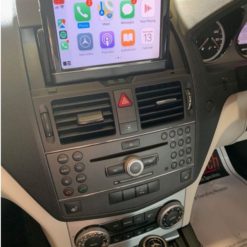 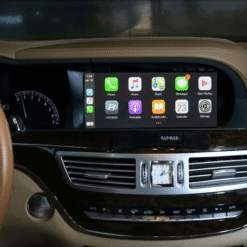 £5.00
Add to basket
Pay Deposit
Approximate Installation Time for most cars: 1-2 Hours On cars with Media Interface installed this will be compromised. To allow an AUX connection the settings need to be changed within the radio which will de-activate the Media Interface. Instructions on how this is achieved can be supplied.

There are no reviews yet.